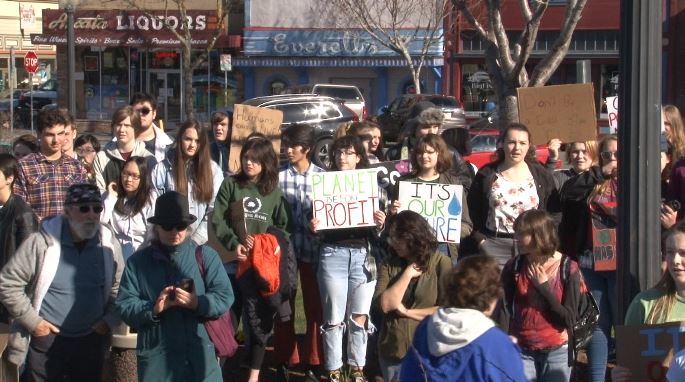 ARCATA, Ca. (KIEM) – A local high school here on the north coast joined in on a global movement all to protest climate change.

The sounds of trumpets rallying students together.

Arcata High School Students walked out on their classes to join in on the Global Climate Strike.

“I think the point of civil disobedience and walking out of class gets the point across, we get more media coverage, more people are like wow, they’re giving up their education to do something,” said Mackenzie Ridgewood, a senior at Arcata High School and one of the organizers.

At 10 A.M. this morning, students left school and marched all the way to the Arcata Plaza. There, they were met by local groups who shared their passion.

“I am totally so moved by this event today,” says Mary Sanger, a member of 350 Humboldt, “to see the enthusiasm and the eloquence with which the young are bringing to this serious problem.”

Even one city official came to show her support with the Arcata High School students.

The protest showed, this generation taking the future into their own hands.

“If we don’t do anything right now, what’s going to happen to where we live? It’s just not going to be a part of us anymore and we’re the younger generation and that’s what affects us the most,” said Karlee Jackson, a member of Earth Guardians.

This movement is just one of the first steps.

“This is really what’s going to take to make the change that needs to happen,” says Sanger.”

“It’s going to take all of us working together.”

But their fight doesn’t stop here.

“If we don’t do something now, we’re not going to have a chance later on,” said Ridgewood.

According to Fridays for Future, more than 2000 Global Strike Marches took place in more over 100 countries.

One parent tells Redwood News, she let her kids join the march, because a movement like this gives them a voice.