CRESCENT CITY, CA (KIEM) – Fourth of July festivities bring tons to Crescent City for the parade on H Street. Then once that was over, attendees headed over to Beachfront Park for games, food, and live music.

The cannon shot that kicks off the Crescent City Fourth of July Day Parade Thursday morning. The festivities are something that locals and people from out of the state enjoy. Kids pick up candy that gets handed out to them.

“I got Jolly Ranchers, Skittles, Reese’s Pieces,” said Brendan Eggen who is from Sacramento visiting family in Crescent City.

The marching band walking downtown as people jamed to the tunes they played.

Once the parade was over, there are fun activities for children and adults at Beachfront Park. Like watching artists draw pastels on sidewalks.

“I think people are really talented,” says Maykala Jackson, 15, a Crescent City Resident. “If I got a slot then it’d be just stick figures. So I give them props.”

One of the most highly anticipated events on the Fourth of July at Beachfront Park is the fireman’s water ball. The object of the friendly competition is to get the ball to the other end of the line. Attendees sat along Front Street to watch the tradition.

“It’s all about nozzle control, and it teaches people how to handle the hose and move hose,” said Tim Sanderson, an Engineer for Crescent City Fire and Rescue.

This is all to remember that America got their Independence from Britain 243 years ago. When one Coast Guard Veteran hears other people say, “Proud to be an American,” it brings tears to his eyes.

“I think it’s important that we don’t lose touch of where we are and where’ve come from. We still have a long ways to go, but without team, we wouldn’t be where we are today,” said Michael German, a Coast Guard Veteran.

There will be fireworks over the Battery Point Lighthouse at 9 p.m. Thursday in Crescent City. 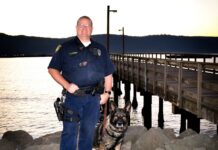